In under six months, YouTube Music will be Google’s one-and-only music service. Google Play Music is scheduled to shut down at the end of the year, leaving YouTube as Google’s one-stop media brand. As part of this transition, YouTube Music recently added the last great Google Music feature to its lineup: music-library support. After an agonizingly slow rollout, this long-time Google Music user gave the service a whirl and is back to report: this is going to be a mess.

For those who aren’t aware, the “Music Library” feature lets you bring your own purchased music to the service. Google Music launched with the feature back in 2011, which let you upload your MP3s and whatever else to Google’s servers, and then you could stream or download them to your other devices. Google Music has its quirks, but it is a fantastic service for syncing your music collection across multiple devices, backing up your music, and putting your music into the Google Cast ecosystem for easy playback on a Google Home speaker or Android TV. YouTube’s takeover of the service includes an easy one-click library-transfer feature, which works great. The problem with YouTube Music is the restrictive playback rules, which are a major downgrade from Google Music.

I could sit here and complain for days about YouTube Music’s regressions, the maze-like UI, and the weird blending of random YouTube crap and my music collection. But what I really want to shout from the rooftops right now is this: YouTube Music doesn’t respect people who purchase music. If you bought your music, uploaded it to YouTube Music, and expect to be treated like you own the music, this service is not for you. If you bought a Google Home smart speaker or any other Google Cast device, Google’s public position right now is that you’ll need to pay a monthly fee to cast to your speaker once Google Music shuts down.

YouTube Music is really only for The Music Renter—someone who wants to pay $10 per month, every month, forever, for “Music Premium.” This fee is to buy a monthly streaming license for music you do not own, and I’d imagine a good portion of it goes to music companies. When you don’t pay this rental fee, YouTube Music feels like a demo app.

I prefer to own my music, and I own a lot of independent music that wouldn’t be covered under this major record-label streaming license anyway, so I have no interest in this service. The problem is YouTube Music also locks regular music-playback features behind this monthly rental fee, even for music you’ve uploaded to the service. The biggest offense is that you can’t use Google Cast without paying the rental fee, but when it’s music that I own and a speaker that I own, that’s really not OK. Google Music did not do this.

Enlarge / The Google Home / Google Nest family of speakers. You need to pay a monthly fee to use them with YouTube Music.

I would be pretty offended if someone referred to me as a “free” user just because I don’t want to subscribe to Music Premium. I paid good money for plenty of music from all over the Web. I’ve paid hundreds of dollars for Google Home speakers, which (for the normal “medium” size) are $130 a pop. Thanks to the initial slow rollout of basic features to a Google Home, for a long time, music playback across multiple speakers was the only thing a Google Home could do well. When people purchased these speakers, Google Music was the official way to play your music on a Google Home, and of course, it did so without a monthly fee. When Google shuts down Google Music, Google will be taking its line of speakers and telling customers: “If you want to continue playing music on your speakers, start paying a monthly fee.”

This seems insane, and it is hard to believe that it will actually happen, but that is how things stand right now. Before publishing this article, I contacted Google PR and tried to get someone to shoot down the idea of suddenly charging a monthly fee to use my speakers, but the company only reiterated that YouTube Music requires a monthly fee for Google Cast.

Google Cast support is built into many music apps and services, and with a single tap, you can send your music to any other Google Cast speakers on your local Wi-Fi network. Google Home speakers do have an alternative Bluetooth mode, where you can pair an arbitrary Bluetooth device to them and beam over music, but this comes with a ton of regressions over casting. First, you can’t use Bluetooth pair on a multispeaker group, only a single speaker. And remember, for a long time, multiroom music playback was Google Home’s only selling point. Second, managing multiple Bluetooth devices, especially on Android, is a buggy, clunky nightmare and something I definitely do not want to do. Third, Bluetooth is limited to the range of Bluetooth, while Google Cast works across the entire home network. Fourth, your device needs Bluetooth, so you can’t start music from a computer that doesn’t have Bluetooth. Fifth, you can’t start music playback with a voice command, which is, like, the entire point of a Google Home. Bluetooth playback is not a replacement for casting. 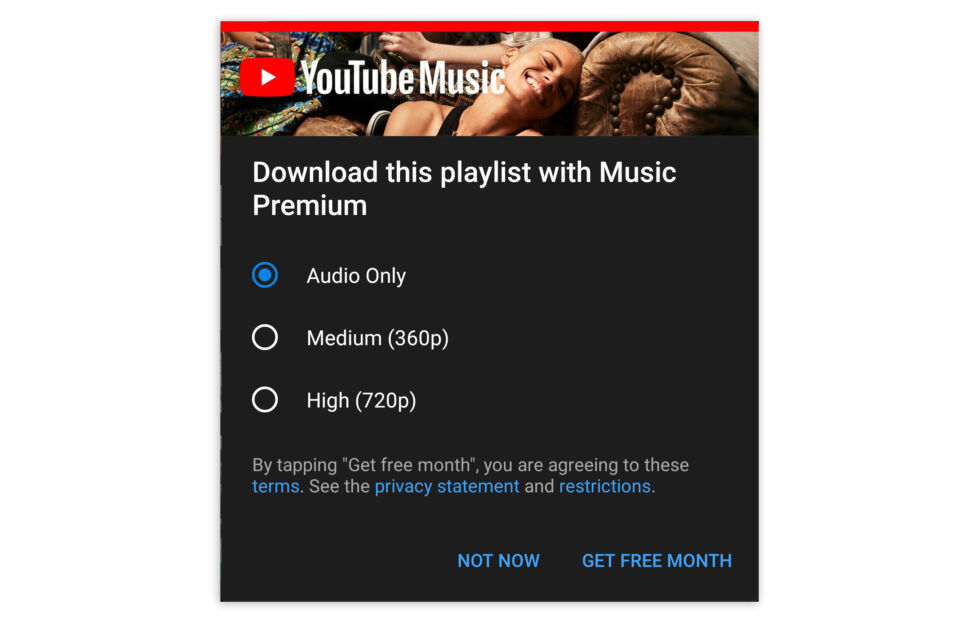 Enlarge / Pay money to download the songs you uploaded to us! I am not sure why there is a video option, I guess one or two videos sneaked into this playlist?

On Google Music, downloading your cloud-based music collection is absolutely something you should do if your phone has the space for it. Besides enabling offline playback, which is great to have, it also is just a general performance improvement. Why make a round trip to the Internet when you don’t have to? When new phones have anywhere between 128GB to 1TB of storage, downloading thousands of songs is really not a big deal. Google Music made this a bit difficult: you had to make a playlist of your music collection and then download that playlist, but at least the service would do it. YouTube Music wants to charge a fee.

But again, when I own the music, charging a fee to download it to my phone is not OK. I could just as easily plug in a USB cable and transfer my music over. I’m temporary “downloading” a song every time I stream it anyway—just let me save it. This will save my bandwidth and Google’s bandwidth and will improve performance. Google Music didn’t charge a fee for this.

Does anyone trust Google services anymore?

Right now, YouTube Music feels like a cash grab. Google isn’t just disrupting users by kicking them off a service and asking them to move over to another service—the company is also tightening the screws and hoping to pick up a few more monthly subscribers in the process.

If Google actually keeps these restrictions around when Google Music closes, I will rank it as one of the worst things the company has ever done. Google has been doing an incredible amount of damage to its brand and its ecosystem in recent years by shutting down product after product. Recently, we’ve seen it kill or plan to kill Google Inbox, Google Hangouts, Google+, Google Cloud Print, Google Allo, and YouTube Gaming, and this is on top of painful earlier shutdowns people still remember, like the death of Google Notepad and Google Reader.

The Google Music and Google Home transition is different, though. All of those other services were free—or at least ad-supported—products. No money changed hands. When Google Music dies, Google will be taking a hardware product people paid for and bricking the music playback functionality unless they start paying a monthly fee.

I am really hoping the company reverses course on this, but I’m not sure what I’d do if the end of the year comes and hundreds of dollars’ worth of speakers suddenly stop working.

This move would be up there with the death of the Works with Nest ecosystem, when Google demolished some people’s smart home setups because it wanted to shut down Nest accounts. At least that had the excuse of “not invented here”—Nest was an acquisition. The Google Music shutdown is purely Google’s attention deficit disorder in action. From an outside perspective, the company has no top-down direction and can’t seem to stick with products over the long haul. Google executives seem clueless when it comes to the damage the company is doing to its own brand, and shutdowns like this don’t just affect the individual users—they send a message to the entire tech industry that Google products can’t be trusted and aren’t worth investing your time in. We’re seeing Google reap what it has sown with the launch of Google Stadia—developers and users are staying away from the service because they expect Google to give up on it in a few years.

I would like to point out that YouTube made $15 billion in 2019. The Google division is not struggling for cash. When will it be enough? Just try to do right by your users before you chase them all away.

Lenses for Apple AR glasses are reported to be included in take a look...

Michael - June 30, 2020
0
Enlarge /. Although an eraser utility can occasionally save your bacon, relying on one was never...

Amazon Pushes Again Prime Day Once more To The Fall

Michael - July 2, 2020
0
Amazon’s Prime Day sale is reportedly being pushed back again as coronavirus cases spike in the U.S. The massive sale will now be held in...
© All Rights Reserved - desotopost.com
MORE STORIES

Apple is altering elements of its app evaluate course of after...