Enlarge / Microsoft’s Surface devices have user-replaceable SSDs, but it’s difficult to find them in the right (physical) size.

Microsoft’s Surface devices had a well-deserved reputation for being impossible to repair in their early years, but Microsoft has sought to change that more recently. Newer Surfaces feature detailed repair manuals and, at least in theory, easily upgradeable SSDs.

I say “in theory” because it hasn’t been as simple as going out, buying a drive, and installing it. The Surface’s storage slot uses the standard M.2 interface, and most devices make it easy to access, but the PCs use relatively rare 30-mm-long drives that most of the big SSD makers simply don’t offer to regular consumers. This has made it harder to do that old tech-savvy money-saving trick: buying a 128GB or 256GB version of a computer and upgrading it with a 512GB or 1TB drive for a fraction of what the company would charge you to do it.

But that’s slowly changing. Some of the smaller-but-still-reputable SSD makers like Sabrent and Inland have finally started offering 30 mm-long versions of some of their SSDs complete with retail packaging and standard warranties. Until recently, the best way to get upgrades for these drives was to buy a warranty-less, possibly used white-label drive from the likes of Newegg or eBay. So being able to buy SSDs in full retail packaging with actual warranties is an improvement.

DIY storage upgrades can save you a ton

Laptops and small form-factor PCs began adopting the M.2 connector in earnest in 2015 and 2016. It was (and is) most commonly used to save space in thin-and-light designs, replacing larger SATA and mini PCI Express connectors and devices. But since then, it has become the go-to interface for high-speed storage. High-end PC motherboards often come with three or more separate M.2 connectors for SSDs, and it’s also the format of choice for expanding your PlayStation 5’s internal storage.

M.2 devices can come in lots of physical sizes, and the most common for SSDs is the gumstick-esque “2280” (so-called because it is 22 mm wide and 80 mm long). Everything from Samsung’s high-end 990 Pro to Western Digital’s budget-friendly WD Blue SN570 is a 2280 drive, and most laptops and motherboards are set up to use 2280 drives by default (even if they sometimes include mounting holes for longer or shorter M.2 devices). This is a self-perpetuating cycle; other M.2 sizes exist, but most PCs take 2280 drives, so most SSDs use the 2280 size, so most PCs continue to take 2280 drives, and so on. 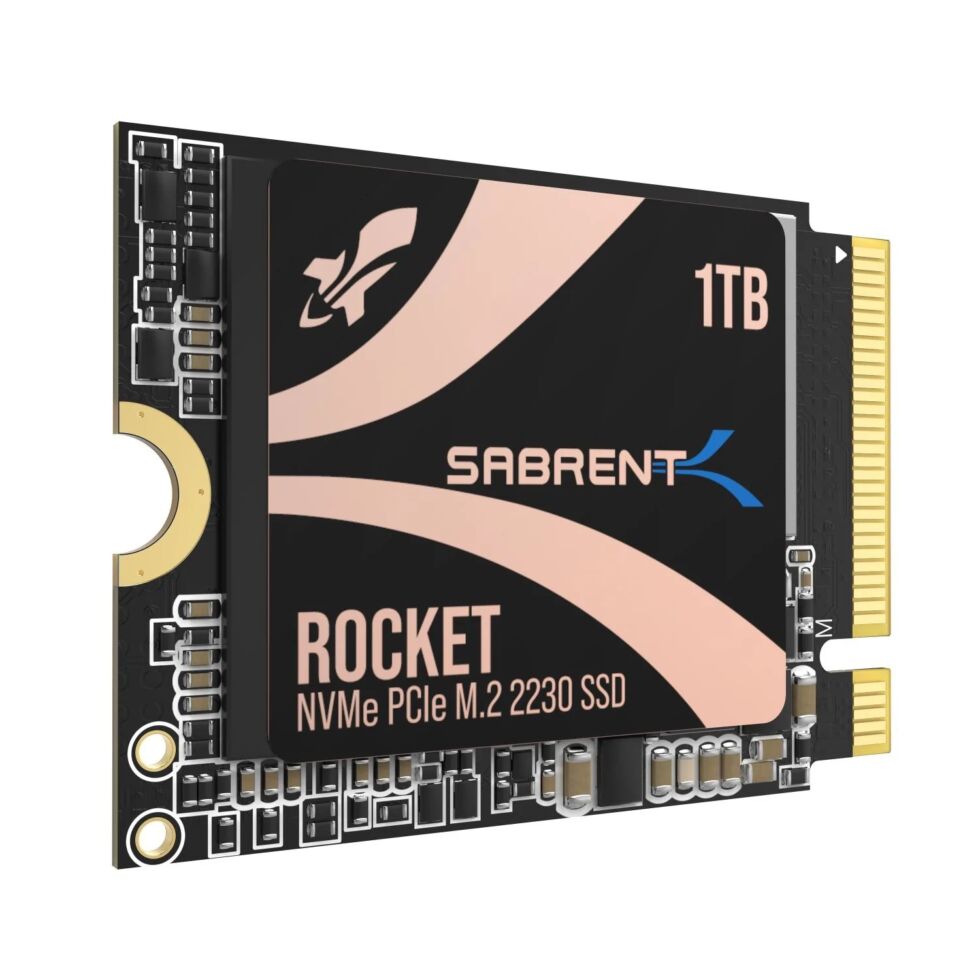 Enlarge / This 30-mm-long Sabrent Rocket SSD is one of the few that can be purchased complete with retail packaging and a retail warranty.

But 30-mm-long 2230 SSDs are slowly becoming more prevalent. Microsoft uses them all over the place, from the Surface Pro 9 to the Surface Laptop Go, and even the Xbox Series X and S have 2230 M.2 drives installed inside. It’s also the drive size of choice for Valve’s Steam Deck. And DIY upgrades for most of these devices can save you money and get you more storage than the companies will sell you directly, even though prices for 2230 drives like the Sabrent Rocket are relatively high for a midrange SSD ($90 for 512GB and $160 for 1TB).

Upgrading the Surface Laptop Go 2 from a 128GB SSD to 256GB costs between $50 and $100 if you buy from Microsoft or another retailer, and higher-capacity drives aren’t available. Microsoft will charge $300 to upgrade the Surface Pro 9 from a 256GB SSD to 512GB, and $600 to upgrade from 256GB to 1TB. The Steam Deck’s various price tiers come with other non-storage-related benefits, but going from the base model’s 64GB of slow eMMC storage to a 256GB SSD still costs at least $130.

Apple Q1 earnings miss the mark virtually throughout the board

AMC Plus Free Trial: Stream for a Week for Free

- December 8, 2022
0
We are in the golden age of streaming where there are so many options, it’s unprecedented. There’s no better way to break in one...

Tesla makes its totally self-driving debut, however it comes with a warning

- October 26, 2020
0
Tesla has unveiled its much-anticipated Full Self-Driving (FSD) feature in beta mode, which will allow select Tesla owners to experience the next phase of...

Xiaomi Mi Band 7 May Come With A Bigger, At all...

Bang & Olufsen Beoplay E8 sports activities are designed for the...