“An ambitious, beautiful adaptation of Carlo Collodi’s tale with as much to offer adults as it has for younger audiences.”

Carlo Collodi’s 1883 novel The Adventures of Pinocchio has been adapted and reimagined in one form or another countless times, to the point where the adventures of its titular, wooden marionette brought to life have become a generation-spanning touchstone in popular culture. It’s been done so often, in fact, that it’s fair to wonder whether there’s any way to make the 140-year-old tale feel fresh and fascinating.

And yet, Guillermo del Toro manages to do just that — and so much more — in his gorgeous and brilliantly crafted adaptation of Pinocchio, which makes a strong case for itself as one of the year’s best films, animated or otherwise. 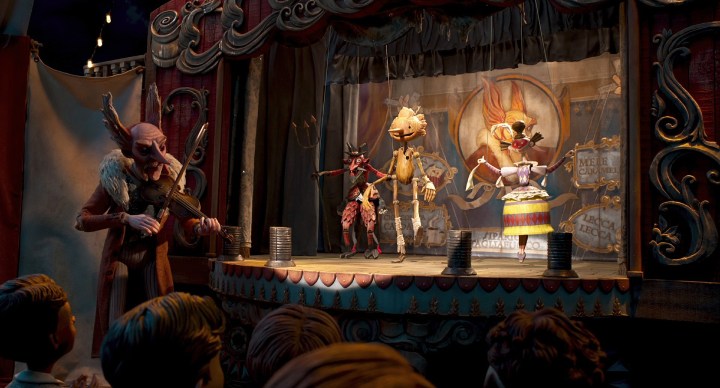 Directed by del Toro and Mark Gustafson from a screenplay del Toro penned with Patrick McHale (Adventure Time), the stop-motion animated Pinocchio — also known as Guillermo del Toro’s Pinocchio to differentiate itself from Disney’s disappointing, live-action Pinocchio released just a few months ago — holds plenty of surprises for anyone familiar with the well-worn tale, beginning with its setting.

Rather than setting the film in the late 19th century, del Toro’s Pinocchio unfolds in Fascist Italy during the 1930s and incorporates the political and cultural tensions of the era into its main character’s adventures. The intense religious and nationalistic influences of the era loom large over this version of the tale and cast a darker, more complicated shadow over an otherwise familiar story.

That shift in tone shouldn’t come as much of a surprise for those with some awareness of del Toro’s oeuvre, and in many ways, the saga of Pinocchio plays to his strengths. Del Toro is a master of blending wonder and whimsy with the macabre and unsettling, and the film’s use of stop-motion animation to tell a story both energetically playful and darkly existential aligns perfectly with del Toro’s approach to storytelling.

To be clear, it’s not all doom and gloom in del Toro’s Pinocchio, but parents expecting something akin to Disney’s lighthearted, brightly colored spin on Collodi’s tale should probably prepare for some complicated — but important — conversations about faith, fascism, war, and mortality as the title character bounces from one predicament to the next in 1930s Italy. The film’s “PG” rating arguably belies the intensity of the story’s willingness to let its characters grapple with the meaning of life and what it means to live well, as well as how we process grief when those around us pass on. 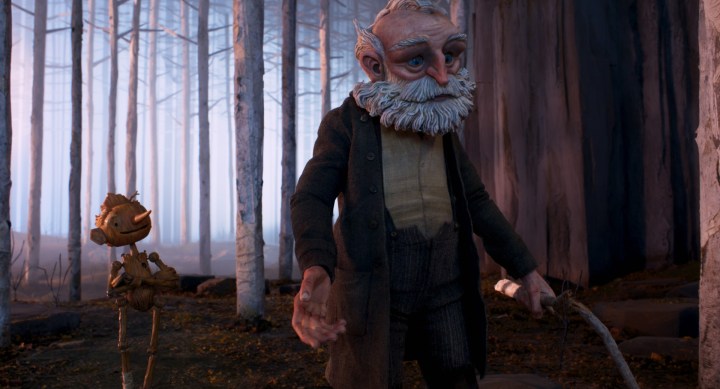 Light in the shadows

For all of the somber themes explored in Pinocchio, there’s also plenty of fun to be found in the character’s adventures, too.

Gregory Mann voices the film’s wooden boy and does a fantastic job of imbuing his on-screen silliness with as much heart as the sadder moments. The film has no trouble pivoting when the story calls for humor and the sort of raw, unfiltered happiness that comes from being a young boy in a world full of wonders (particularly when that sentiment can be expressed in a song) and the film’s creative team finds room for plenty of both in Pinocchio’s adventure.

Once you get accustomed to the visual aesthetic of del Toro’s stop-motion Pinocchio, it’s easy to get lost in the nooks and crannies of the gorgeously detailed sets and the features of each and every character introduced in the film. The richness and detail of their movements and interactions with the world around them are so captivating and smooth that it feels like a minor miracle for any animation team to pull off, and every scene in the film feels like a celebration of the puppet team’s tremendous talents.

Conveying the highs and lows of Pinocchio’s experiences — as well as those of his creator, Geppetto (voiced by David Bradley), and the rest of the characters — is no easy ask when you’re working with puppets, but the puppeteers and animators fill every character with emotive power. 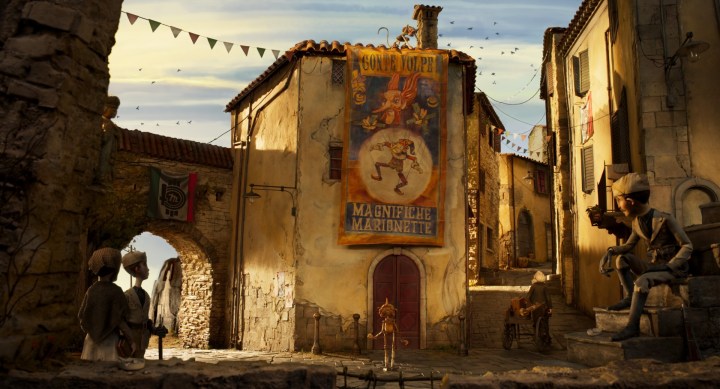 It speaks volumes to the immersive nature of Pinocchio that it’s so easy to look past the impressive voice cast del Toro assembled for the film.

Along with Mann and Bradley, who bring a tremendous amount of depth to Pinocchio and Geppetto, respectively, Ewan McGregor is a triple threat as the voice of Sebastian J. Cricket (a.k.a. “Jiminy”), the film’s narrator, and an occasional singer as the story unfolds. He performs well in all three responsibilities, and his rich voice provides some much-needed humor and a sense of gravitas at various points.

Perlman’s gravelly voice is perfectly suited to portray Podestà, the town’s highest-ranking official in the Fascist government and the demanding father of Candlewick, the human boy who eventually befriends Pinocchio. Waltz is even more perfectly cast as Volpe, the down-on-his-luck carnival puppeteer who sees a money-making opportunity in Pinocchio. The Oscar-winning Django Unchained and Inglourious Basterds actor throw himself into Volpe’s musical numbers with an enjoyment that pours out of his delivery and makes his evil character all the more fun to watch.

There aren’t many filmmakers around who can walk the line that del Toro navigates so well in Pinocchio.

It’s impossible to decide whether Pinocchio is more accurately billed as a children’s movie with mature themes or a film for adults built like a movie for children. Del Toro seems content in letting it be both, and it offers a powerful, rewarding experience regardless of how one sees fit to describe it.

No matter how it’s billed, del Toro’s Pinocchio is something special and offers a strong reminder that some stories are truly timeless, capable of moving us and eliciting a powerful response no matter where we are in life. Its themes are universal, even as it tells a story that feels wonderfully singular in its look and method of delivery.

In both its ambition and execution, Pinocchio provides yet another reason why del Toro is one of Hollywood’s most visionary filmmakers, and if it does indeed earn the award recognition Netflix is hoping for, it will be a well-deserved honor.

S W - August 8, 2020
0
Doom Eternal wasn't launched until March but is already getting its first campaign expansion with the possibility of more on the way. Bethesda and id...

S W - October 8, 2020
0
Do you remember starman No, not the Bowie song, but the mannequin passenger was behind the wheel of Elon Musk's Tesla Roadster, which shot...

The key service is alleged to have paid for entry to the telephone's location...

- December 8, 2022
0
A benefit of modern technology is the convenience it introduces to traditional tasks and hobbies, like reading. Audiobooks are a good example, and if...

The Finest Low cost GoPro Options that Will not Go away...

HelloFresh Free Trial: Can You Get Your First Field for Free?