The holiday season is upon us, and a handful of comic book superhero TV shows do their fair share of giving fans some timeless Christmas-themed episodes. With how serialized superhero stories are in just about every medium they appear in, which is just about all of them, seasonal festivities are an inevitability, and the DC Animated Universe has some choice selections.

Unsurprisingly, some of the most iconic caped Christmas tales come from the widely revered Batman: The Animated Series, but the likes of Superman, Martian Manhunter, as well as Static Shock have their memorable moments. And even if the future of the live-action and cinematic DCU is still under construction, these animated episodes are more than worthy of becoming traditional yearly viewing.

Christmas with the Joker (Batman: The Animated Series – season 1, episode 1)

Batman: The Animated Series — and the late and great Kevin Conroy who spearheaded the titular hero’s story — is what kickstarted the DCAU and the iconic atmosphere it created for all of its panthea. Just as well, Star Wars veteran Mark Hamill is the one who put a voice to the clown makeup with his iteration of the Clown Prince of Crime. And in the only holiday-themed episode of the series, Christmas with the Joker created an unforgettable Batman venture.

It’s the first episode in the show that puts Batman, Robin, and the Joker on the same screen, and it strikes the perfect balance of stylishly moody with the inherent campiness of the comic book medium — but it’s still all quintessentially Batman. After the Joker breaks out of Arkham Asylum, the villain kidnaps Commissioner Gordon, Harvey Bullock, and Summer Gleeson to create his own morbid family celebration as he forces the Dynamic Duo to venture through his Nutcracker-themed traps.

Taking things into the wider DCAU with the Justice League series, Comfort and Joy is a relaxing holiday-focused episode. It puts a welcome spotlight on a variety of superheroes through Hawkgirl, Green Lantern, The Flash, Superman, and the underrated Martian Manhunter. All of these characters are broken up into smaller stories, and it has a welcome mix of touching and suitably silly emotions.

All of these mini tales are fitting of the holiday spirit, but it’s the story involving the Man of Steel bringing the fish-out-of-water Martian Manhunter back to Smallville to spend Christmas with his family that resonates the most. Seeing the latter interact this closely with Superman and Ma and Pa Kent and experience the warmth of such a holiday is enough to water the eyes. 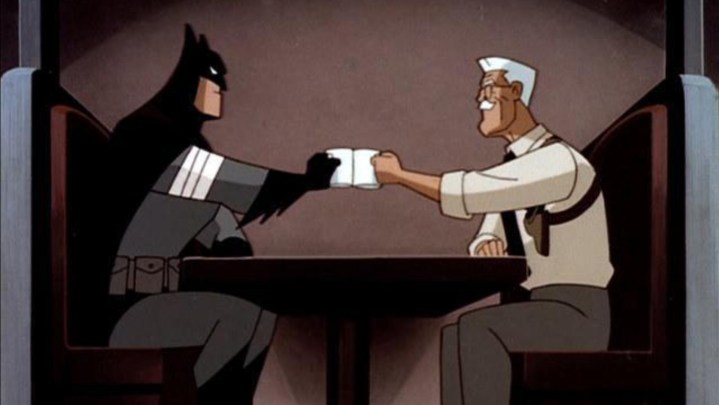 In the first direct sequel series to The Animated Series, The New Batman Adventures opens up its run with more Christmas-themed hijinks. Made up of three vignettes, Holiday Knights begins with the devious new pairing of Harley Quinn and Poison Ivy ruing their current financial predicaments, with the two resolving to abduct Bruce Wayne, mind control him, and have him take them shopping. Meanwhile, Batgirl, officer Harvey Bullock, and officer Renee Montoya are forced to deal with Clayface’s chaos in the middle of Gotham City’s shopping mall.

The full story wraps with the Dynamic Duo having to stop the Joker from setting off a sonic weapon on New Year’s Eve. It’s a suitably festive and colorful collection of holiday stories, and it has one of the most heartwarming endings with Batman and Gordon meeting up at a diner after hours to share a coffee and bring in the new year. This is another excellent episode and scene, as well as another highlight of the best Batman content available on HBO Max. 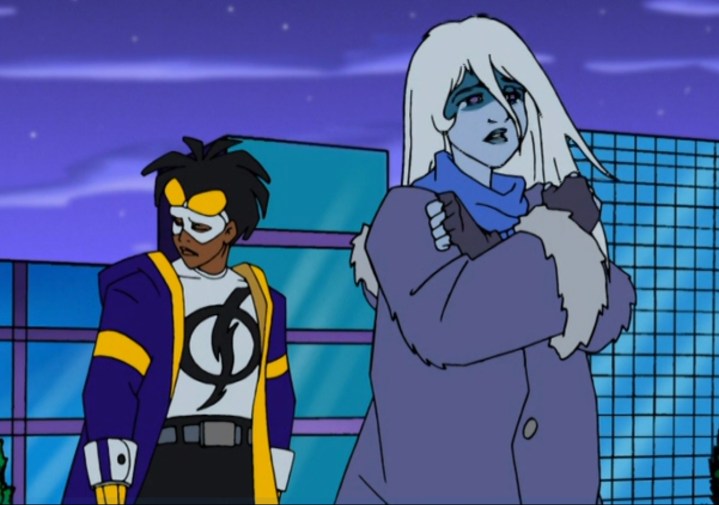 Adapting the Milestone Media/DC Comics character of the same name, Static Shock was a breath of fresh air for the DCAU. It helped make the character a cult classic for 2000s kids, and it combined welcome guest appearances from the wider DC universe while still letting this new hero stand proudly on his own two feet. And, as such, the series gave way to another classic DC Christmas special in the form of Frozen Out. It’s a poignant story in how it depicts the origins of (initial) villain Permafrost, aka Maureen Conner.

Static Shock/Virgil Hawkins sees her homeless and asks him for money, but he brushes her off for being in a rush with Christmas errands. Later, she’s seen thrown out of the mall for stealing jewelry, leading Virgil to ask his pastor how she came to be in her position. He reveals to the young hero that she grew up in a broken home that led her to destitution following the death of her mother. Frozen Out is a powerful holiday episode that fearlessly tackles social justice issues like childhood poverty and homelessness without cheapening its impact.

All episodes of Batman: The Animated Series, Justice League, The New Batman Adventures, and Static Shock are available to stream now on HBO Max.

S W - August 26, 2020
0
Apple's streaming service, TV +, wasn't doing as well as the company had hoped and is now leaving no stone unturned to attract more...

This gadget prevents Alexa from listening to you

The place and when to observe the Harry & Meghan documentary present

- December 5, 2022
0
Everyone loves a little palace intrigue. In particular, the English royal family has been a constant source of fascination for centuries. From Henry VIII’s...

iPhone SE vs. iPhone 11: If you happen to virtually double the value, what...

Now you can stream Netflix on the Nest Hub, Nest Hub max

Greatest Prime Day Good House Offers 2020: What To Count on